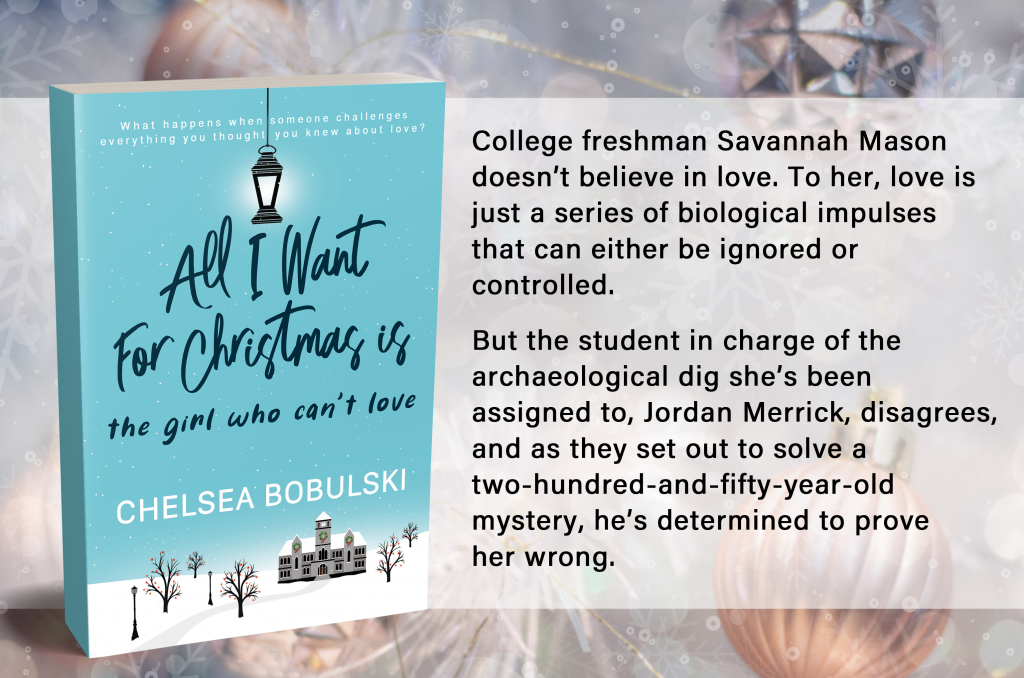 Get swept up in this holiday romance as Chelsea Bobulski's All I Want for Christmas young-adult contemporary series comes to an end by exploring the hope and magic of unforgettable love.

College freshman Savannah Mason doesn't believe in magic or true love. She believes in science, and science tells her that love is nothing more than a biological impulse to breed--an impulse that can, thankfully, be ignored. Which is a good thing because no woman in her family has ever been lucky in love. In fact, all of them have ended up broken-hearted and insist on blaming a mysterious, vengeful curse. But Savannah is determined to rewrite her story, and as far as she's concerned, she's never going to fall in love.

Jordan Merrick is a junior at William & Mary and on the fast track to obtaining his life's goal: becoming the next Ron Chernow. He vaguely imagines that, someday, he'll have a wife and kids, but Jordan's drive is to accomplish his goals as quickly as possible. Love can come another day once his career is cemented.

What neither Savannah nor Jordan planned on is meeting each other, and as they keep crossing paths on campus and Savannah finds herself helping at Jordan's archaeology site, all their reasons for putting their love lives on the back burner start to blur.

Forged together, Savannah and Jordan investigate Savannah's family's curse on love and explore a collection of love letters between a revolutionary soldier and the girl he left behind. But when they come face-to-face with the truth about themselves--and with the truth about what they've become to one another--Jordan's outlook on love starts to waver, and he begins to wonder if he can convince Savannah that love is real. But will Savannah run before her heart is able to let go of cynicism and believe in the power and magic of love?

At once thought-provoking and charming, All I Want for Christmas is the Girl Who Can't Love will stir a longing in every reader's heart for the hope in magic and romance that can only be found during the holiday season.